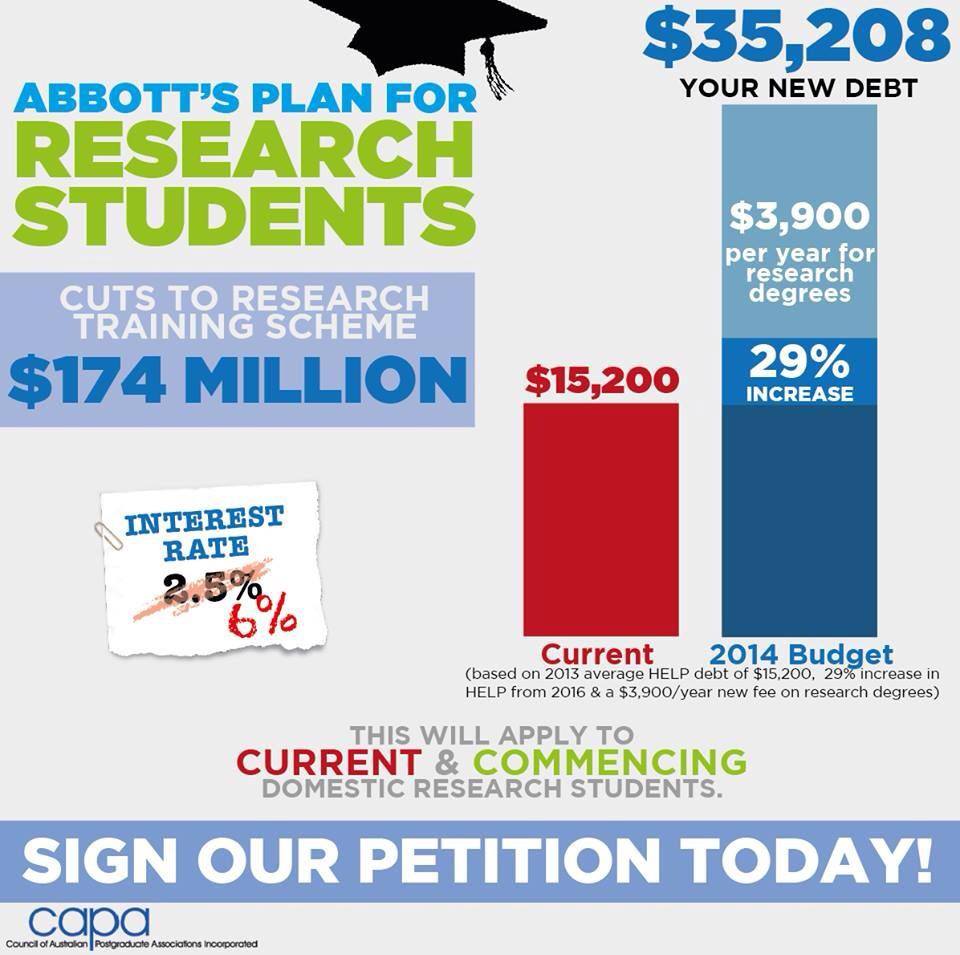 On May 13, the Federal Government released a Budget which will cripple university students and researchers.  Since then CAPA has had an overwhelming response from postgraduate students concerned about the effect of the Budget changes and in particular the proposal to allow universities to introduce fees on PhDs and Masters by Research covered by Research Training Scheme places.  The Research Training Scheme has also been slashed by $174 million.

On this page you will find information about CAPA’s campaign against these proposals.

Join the 2,000+ students and supporters who have already signed our petition to reject fees on PhDs and Masters by Research:

WRITE TO YOUR SENATOR:

The new Budget has the support of the House of Representatives – it will be in the Senate where the final decision is made.  CAPA has written to each member of the new Senate on July 1st, urging them to vote against the introduction of fees for PhDs and Masters by Research, the slashing of the Research Training Scheme, and the introduction of interest rates of up to 6 per cent on existing HECS/HELP debt.

You can find the full list of Senators we wrote to, and their response as to how they’ll vote on Fees on PhDs, HERE.

If a Senator in your State or Territory hasn’t responded to CAPA’s letter and you want to help them make up their mind, we encourage you to send them a letter.  All Senators can be reached at the following address: (Name and Title), The Senate, Australian Parliament House, Canberra ACT 2600.

WHERE YOUR UNIVERSITY STANDS:

The following is a list of who we have written to and how to contact them should you wish to do so.  You can read our letter here.  As we receive responses we will update this page.

Every CAPA affiliate organisation has been sent 80 posters and 100 stickers to promote the campaign.  If you need more materials, or you are not an affiliate campus and would like materials, please contact Meghan at president@capa.edu.au