The Council of Australian Postgraduate Associations (CAPA) today launches the campaign “Support Postgrads – Australia’s Future” which assesses political parties on their commitment to the policy reforms most needed to improve conditions for postgraduate students.

CAPA is disappointed that the Liberal-National Coalition could not be bothered to respond to our election questionnaire. However this may be reflective of publicly stated policy positions that are opposed to the key priorities of postgraduate students.

We implore voters to take the parties’ higher education policies into consideration when going to the polls on May 18.

We asked each major party their stance on policy issues of most relevance to postgraduate students. Our main requests are:
•    Extend income support (e.g. Austudy) to all full-time domestic postgraduate students, subject to means testing
•    Guarantee the continuation of the Student Services and Amenities Fee (SSAF)
•    Reverse the cuts made in the last term of government to higher education and research funding, and return the HELP loan repayment threshold to pre-2018 levels
•    Cap the cost of tuition for postgraduate full-fee places 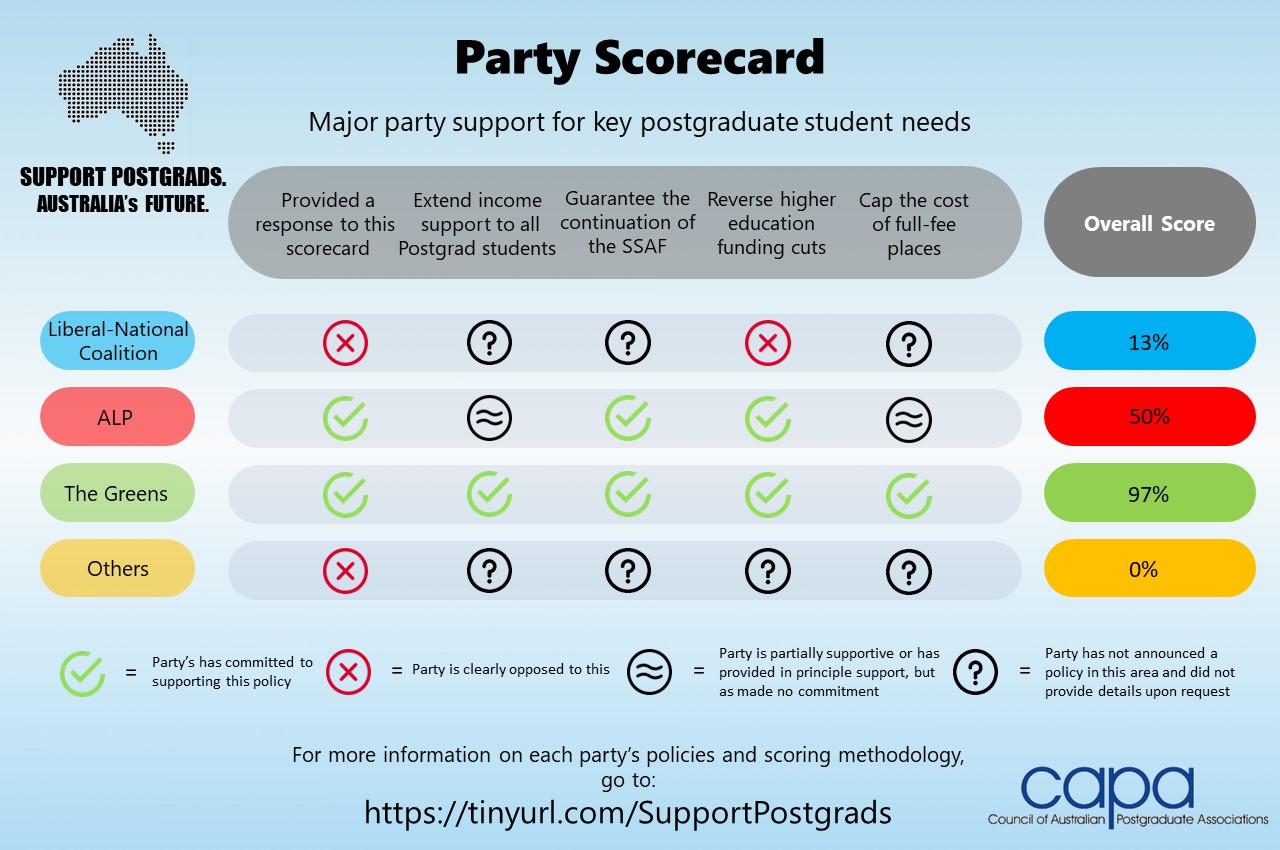 The full report is available at http://www.capa.edu.au/2019-federal-election-campaign-support-postgrads-australias-future/

This explainer is designed to help affiliate organisations of CAPA understand the key messages of the 2019/20 Federal Budget. It covers details that CAPA thinks are relevant to students, and does not cover everything contained in the budget. Most of the measures included in the budget, particularly new programs, will require legislation that will not be complete and passed before the Government calls the next Federal Election. Therefore, much of this budget is an election statement and much is unlikely to be fully realised unless the Coalition are re-elected or the ALP adopts the measures should they be elected as government.

Tertiary students have again been given the raw end of the deal, with the 2019 Federal Budget entirely absent of policy for universities or anything substantial for vocational education.

With the funding freeze from the 2017 MYEFO still in place, universities are set to net a 5% decrease in funding by 2020. There is no plan to undo the damage of the Liberals’ cuts to higher education and research during their term. Commitments to research funding are being cherry-picked by the government, and follow cuts of $328 million over the last 18 months.

While the Government has promised $525 million towards vocational education, this follows cuts of $3 billion over the last six years. Furthermore, the Government cannot be trusted to deliver their vocational education apprenticeship scheme considering the momentous failure of their PaTH project from 2016, which saw serious workplace safety breaches and less than one sixth of the anticipated internship opportunities taken up.

Project funding for TAFEs and universities is paltry in comparison to the years of cuts, and reflects a last-ditch attempt at vote buying rather than any actual policy.

“Throwing crumbs at new projects in TAFEs and universities is just an attempt to distract from this government’s absent education agenda,” said NUS President Desiree Cai. “The last six years have seen successive cuts to VET and higher education. This is nothing more than electoral opportunism.”

“The Federal Budget reflects the Government’s total lack of vision when it comes to our nation’s future,” said CAPA President Natasha Abrahams. “The long-term dividends of university research are well established, but the Government wishes to forgo research investment in favour of tax cuts that disproportionately benefit those who need it least.”

“Almost $11 million has been removed from the Indigenous Student Success Program (ISSP) in this budget. The result of these cuts means the ISSP has not had a funding increase for approximately 4 years,” said NATSIPA Vice-President, Dr Sharlene Leroy-Dyer. “This government is doing nothing to ‘close the gap’ on our educational disadvantage.”

“Education is the great enabler; we know that when our mob finish university, it is so much easier for us to move ahead in life,” said UATSIS President Braedyn Edwards. “Unfortunately, the Commonwealth Government has chosen to place greater emphasis on the budget bottom line and the great irony is this: while the Government’s budget is allegedly back in the black, they’re not backing us blacks.”

NUS, CAPA, NATSIPA, and UATSIS are willing to assist the Government to develop a tertiary education policy should the Government decide that they need one.

Women in STEM initiative cannot coexist with the war on science

The Council of Australian Postgraduate Associations (CAPA) says that the women in STEM initiatives announced by the Federal Government are a cold comfort as science has been starved of funding in recent years.

In other words, only 1% of the cut to research funding has been returned via the women in STEM initiatives.

CAPA supports the increased investment to lift women’s participation in the STEM workforce, however this is irrelevant if research is not properly funded. There is no point creating the digital awareness initiative for women in science, when graduates of science degrees face poor career prospects in Australia due to the government’s sustained war on science.

We reiterate our call for national investment to be equal to 3% of GDP.

We echo statements from Australian Mathematical Sciences Institute (AMSI) and Science & Technology Australia (STA) that improvements to gender equity in science can only be achieved with investment in STEM research.

“We need stable research funding and support for this program to be effective. Increased funding for women in STEM awareness is counterproductive if there is no workforce for women to end up in,” says CAPA Women’s Officer, Romana-Rea Begicevic.

No budget biggie: universities and research all but ignored

The Council of Australian Postgraduate Associations puts it bluntly; “this budget has nothing for anyone over the age of 14 and not in vocational education. Not one request made by postgraduate students to this government has been adopted.”

Government forgets skills in their skills and infrastructure agenda

The Council of Australian Postgraduate Associations (CAPA) is horrified at the Government’s priorities as outlined in their 2019/20 Budget handed down tonight.

The Coalition Government is ripping money out of Australia’s future prosperity in a vain attempt to buy votes with their $158 billion of tax cuts that mostly benefit the top end of town.

The Liberals’ sustained cuts to research will drag down the Australian economy in future, as we forgo the high return-on-investment for research expenditure. The Group of Eight universities found that each dollar of research funding they receive returns $10 to the economy.

As far as education goes, this budget has nothing for anyone over the age of 14 and not in vocational education. Not one request made by postgraduate students to this government has been adopted.

Students are suffering, with many unable to afford rent and food. There is also a high prevalence of mental health issues among the student population. However, this budget provides no relief. There have been no improvements to welfare. There is nothing for students living in poverty. The number of Medicare-covered sessions with a mental health professional remains woefully inadequate.

The Coalition’s message is clear: they will sacrifice Australia’s future to buy votes. Their vision extends no further than next month’s federal election.

The Treasurer claims that Australia is “back on track” while students can’t help but fall off the tracks. We need the incoming government to have a vision for Australia’s future as a knowledge economy.