Positive Impacts Dunya Al-Ruhaimi, an international postgrad in Armidale, NSW made to her community. 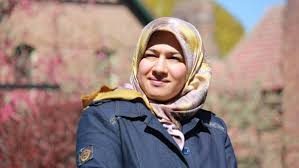 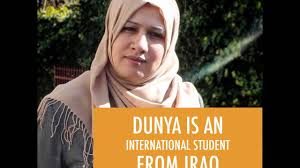 Meet Dunya Al-Ruhaimi. Dunya is from Iraq and was awarded an International Student Award in 2015. She came in to Australia in 2013 and studied a Master in Education at the University of New England, Armidale. When she moved to Australia with her husband and her two kids, she was warmly welcomed by her university’s international student office.  She is now working as the Project Officer at the International Student Hub, University of New England.

I was proud to meet Dunya at the CISA 2017 conference and approached her on sharing her story. One of the things that struck me with Dunya’s story and her journey as an International postgraduate student is her zealous attitude towards caring for the international community even whilst studying and her tenacious efforts at making the International community in Armidale feel welcomed and involved with Australian culture.  Hopefully this inspires you.

Dunya Al-Ruhaimi is influenced by her mum’s perspective on the importance of education as it is a powerful tool for everyone especially women and their families. She feels education is a passport for living a good life. Unfortunately, Dunya’s mum passed away in her fourth year as an undergrad. Dunya was inspired by her mum especially with community engagement and helping others. She was very much interested with the women community in Armidale, NSW and she sought diverse ways to create a safe space for these women, children and their family.

Volunteering Activities as a Student

While being a student, Dunya was interested in international women in the community especially those who were not students and could not access the community because of cultural barriers and language limitations. As a mother and wife, she understood the possible challenges women face. She sought ways to provide a platform for the women and their families to engage with the community and interact with other women in the community. She established an International ladies group for students’ spouses where they meet and interact.  Dunya volunteered as an interpreter with Arabic women in many doctor appointments, child care consultations and a host of many other needs. Dunya devoted her time in the Arabic community by assisting Arabic speakers to cope with the ELC learning system (essay writing).  Dunya was not just interested in helping those from her own community, she also helped new international students settle down in Australia. In 2014, Dunya helped parents to be able to understand the Australian School system through a programme called HIPPY Australia. she is always glad to put a smile on people’s faces.

ABC also captured her inspiring story as part of a series of short films about international students studying in NSW which can be found here http://www.abc.net.au/local/audio/2015/09/23/4318339.htm

Activities as the Project Officer at the International Student Hub

Even after graduation, Dunya has been community focus and driven. Through the International Student Hub, she has offered three free driving lessons for International students and their families living in Armidale. For those living in a small city as Armidale, with limited choices of public transport, owning a car and getting your licence is very essential. Dunya feels that driving lessons are very essential as the road rules are a lot different in many countries.

The Council of Australian Postgraduate Associations (CAPA) is gladdened to hear Senators talk about real reform when it comes to Higher Education. With the Nick Xenophon team rejecting key aspects of the bill it is now clear to the Federal Government that a good hard look at the higher education sector is what is needed.

The Higher Education Legislation would have meant billions being ripped from Australia’s third largest industry and leave students paying even higher fees. The rejection of this bill gives time and certainty for everyone involved to take a step back and focus on developing the best universities in the world.

CAPA would also like to acknowledge Senator Jacqui Lambie, Senator Derryn Hinch, the four One Nation Senators led by Senator Pauline Hanson, Labor and the Greens, all of whom have made it clear that protecting Australia’s Universities is in the best interest of the entire country.

For a long time students, universities and the Australian public have been clear in their support for universities and it is now time for the Federal Government to sit down with the sector and develop real, innovative reform not just cutting funding and increasing fees.

CAPA looks forward to the coming review and discussions centred around Higher Education and will happily work alongside the sector and the Federal Government to build a plan that will secure Australian Universities for decades to come.

“We, like the rest of the sector, recognise the need for changes in higher education but they have to be part of a bigger plan and there has to be genuine consultation with the entire sector. Students included.”

It has long been the position of the peak bodies that students associations should oversee how the student services and amenities is spent. Currently, students directly decide where their funds are spent through annual democratic elections. The only time students do not get a say is when universities keep the SSAF to themselves or student unions are shut down in place of an appointed board.

This is a clear attack on student unions across the country that already face serious financial pressure. Student unions use the SSAF to provide essential student support including counselling, employment and training programs, legal support, leadership development along with many other services.

CAPA, NUS, and NATSIPA condemns Senator Bernardi’s motion and calls upon the Senate to protect students and student unions.

“Postgraduate students at universities across the country rely on the services provided by their student unions and associations, and without the SSAF these bodies would cease to function as we know them, with most if not all being forced to shut down or severely curtail their operations. This includes the meals, legal assistance and academic advocacy which for many students make the difference between continuing and excelling in their studies and being forced to drop out.”

“SSAF is the only pool of funding that guarantees student support and services are well-funded and accessible within our universities. Education already seems to be at the bottom of the barrel for our politicians in a time of serious employment and wage uncertainty for young Australians. We’ve seen nothing but short-term, tinkering-at-the-edges policy from our parliament and attacking SSAF is just another illogical move with no real gains.”

“Aboriginal and Torres Strait Islander students are already facing major hurdles that directly affect our ability to access and retain higher education. Cuts to HEPPP, proposed cuts to Away From Base funding, possible fees for pathways programs and severe slashing of vital services such as ITAS tutoring makes an alienating environment that much more overwhelming. SSAF allows student representative bodies to create safe spaces for students within this environment. SSAF gives our students lifesaving services. Gives our student unions and associations the ability to be there and support their fellow students. Why take away what little we have left? Why take away something that saves lives?”

CISA Vice-President Ahmed Ademoglu says:
“Student experience is an important aspect of international education in Australia. Many international students finish their degrees with great moments from the activities and support they receive from their institutions and SSAF funding is the major asset towards this experience.”