The Council of Australian Postgraduate Associations (CAPA) is dismayed by the move to axe the Education Investment Fund (EIF) after spruiking the importance of research to Australia.

The EIF was essential in ensuring research infrastructure could be developed and maintained well into the future. Research funding requires long term planning according to the Bradley and the Clark and the EIF provided a way for this to occur.

While the National Disability Insurance Scheme (NDIS) is an important program, results from the 2016-17 final budget outcome show that there are other ways in which the NDIS can be fully funded. Removing a fund that provides an avenue for development, job creation, and economic benefit should not be cut for a one-off cost. This is the very essence for the Federal Government’s distinction of good vs bad debt.

Universities are already facing trying times under the proposed Higher Education Legislation cuts. Removal of the EIF will put a halt on infrastructure investment and will divert further funding from research.

CAPA urges the Federal Government to maintain the EIF and to stop the senseless gutting of the higher education and research sector.

“At this stage we have a space agency that has no funding attached to it, a National Research Infrastructure Road Map that is still unfunded, and now our Education Investment Fund is being scrapped. 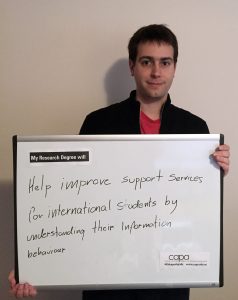 After 8 years or 4.75 years effective full time I have graduated from my PhD at UTAS. This is a short summary of my experience – written to share some courage, and offer advice for anyone else struggling with their PhD.

I started out as an optimistic full time student, but 1.5 years in I had to change my research focus (due to complications with supervision, funding and research data), I changed supervisors and went part-time so that I could work (in many different jobs). I never received a scholarship, had no research funding and only minimum resources to support my research.

My research went from studying the formation of communities online to studying the mobile phone’s role in the acculturation experience of international students staying in Tasmania. I wrote a new research plan which was presented at the International Conference on Communities and Technology doctoral consortium in 2011 to validate the change in direction [download paper].

During the last 8 years (officially) my progress was reviewed 8 times, I had 38 official supervisor meetings and met 22 milestones outlined in an ongoing candidature management plan. I had my candidature extended 4 times, and i used 0 days of leave.

The most common comment from my team after a meeting was ‘discussions with Harry included major concerns re the lack of tangible outputs’, this was the entry for my final meeting in April 2016.

Yet in June 2016 I submitted, and after review by some very prominent academics I received an A and B (minor corrections). Most importantly I needed to send it off to a professional editor to check my grammar and referencing. Editing takes a lot of time…

Since i started i have worked with many PhD students who have found themselves in much worse circumstances than me, but it’s rare for students to share their stories. The kinds of issues are similar, financial, supervision, administration, resources, social isolation, research skills, the challenge of writing, and project management. For me life got in the way a lot as my supervisors put it.

I think that I was able to persist for a few reasons:

My supervisors were very important, but the relationship is complex. Having people who know the university’s rules, that were fair and who pushed me was critical. But these requirements will be different for every person. I don’t believe that the best researcher makes the best supervisor.

I can’t emphasise enough how important student associations were. I got involved early in my PhD, and they turned out to be an invaluable source of support. At the very least they are full of people who are probably going through the same issues as you. They help you learn the universities rules and processes, and give you opportunities to improve them.

Access to support was critical.  Some people and organisations which i followed were:

Throughout all of it managing my own expectations was probably my most significant challenge. Don’t expect that your results will be significant or your experience straight forward. Don’t let these expectations stop you from completing your PhD.

(I want to acknowledge my supervisors, and reviewers – thank you).

The Council of Australian Postgraduate Associations (CAPA) would like to thank the Member for Mayo, Rebekha Sharkie and the Nick Xenophon Team for their willingness to stand with universities and reject funding cuts however we are still gravely concerned about the decreased HELP repayment threshold.

We ask crossbenchers to reject the Higher Education Legislation entirely and, instead, join us in asking for real reform. It is clear that a strong higher education sector provides educational, economic and cultural benefits to the entire country. The international rankings confirm Australia’s standing in education and research but this bill puts that standing and these benefits on shaky ground.

Real reform is possible in Higher Education, we only have to look at the Watt and ACOLA reviews into research training to see that it can be done right when done together. But reform requires the Federal Government to stop looking at Higher Education as a quick budget fix and start looking at the sector as a long-term national priority.

CAPA will continue to reach out to Senators, many of whom have expressed their desire to see reform that can benefit everyone and not just cuts.

“It is clear that when it comes to universities, the crossbenchers, like much of the sector want REAL reform and not just random thought bubbles.”

“The benefits of universities extend beyond education. They provide jobs for rural communities, and providing significant economic benefits to the nation. Senators from Victoria, South Australia and New South Wales should be doing everything to protect universities given the benefits seen in these states.”

The Higher Education Legislation bill is currently being discussed in the House of Representatives today but much of the legislation still remains unclear to the sector including the Council of Australian Postgraduate Associations (CAPA). In the past, CAPA had supported the measure to even out allocation of Commonwealth Supported Places(CSP) for postgraduate coursework students however we can no longer do so.

CAPA has been in discussions with policy makers from the Group of Eight and The University of Melbourne and it is clear that no one really knows how aspects of this bill will be implemented. It is expected that some mythical extra level of bureaucracy will be put in place and could risk the independence of universities.

During the announcement of these reforms the question of the removal of 3000 postgraduate CSP was asked. An assurance was made that these places were “not being used” according to the Minister. Real reform would be to find a way to allocate these places NOT add another level of bureaucracy.

Like the 7.5% conditional commonwealth supported funding which is based on some mystery performance criteria the selection criteria of postgraduate commonwealth support remain unclear. Rather than just force the Higher Education bill through the house when people are distracted by a constitutional crisis perhaps the Education Minister should be told to revise and resubmit.

“I was told quite clearly that the 3000 postgraduate places that were being cut were not being used. But I could easily find 3000 and more Australian students that are begging for commonwealth support in their degrees”

“Many of the aspects of this bill seem to be there as an afterthought just to distract from another batch of higher education cuts and using student fees to fill a budget black hole.”

The Council of Australian Postgraduate Associations(CAPA) is not at all surprised that the Higher Education Legislation is on the agenda for the House of Representatives today. It is almost as if the Federal Government wants to introduce this legislation under the cover of confusion created by a current constitutional crisis.

This bill cuts funding for domestic student education, exploits students to compensate for continued budget failures, and retroactively changes the terms of student loans in a way even banks would never dare attempt. It is a bill with few redeeming qualities and has been rejected by the entire sector.

The Minister for Education and Training has done his best to obscure this issue with cherry picked data and massaged figures on university funding. But worse still, is the Minister has stooped to interfering in the collective bargaining process at a number of universities in order to push this bogus bill.

It would seem that the Minister is trying to convince people that universities have not already paid their fair share in budget repair (Universities Australia has already shown that Higher Education has already been hit by $4 billion for budget repair). Further cuts to universities will have detrimental effects to the higher education sector and to students themselves.

The Minister seems to think that universities can afford these cuts with no ill effect, even though there have been countless restructures and thousands of job cuts sector-wide due to lack of funding. The bill would aggravate existing pressures on students and new graduate, who already contend with dropping employability, increasing cost of living, and qualification creep which forces students to study longer to be competitive in the job market.

“This legislation is taking the same path as the failures of the past with nothing but the manipulation of data and threats of cutting funding elsewhere being used to strongarm the cross-bench, and, like the Pyne reforms, the cross-bench will see through this and stop the bill”

“Every time there is a cut to domestic student funding universities are pushed further to attracting international students and using them as cash cows.”

“The benefits of universities are being lost in the discussion, a university not only provides education and research but they also provide jobs to the local communities, jobs that are at risk when funding is slashed as they have been in the past.”

The Council of Australian Postgraduate Associations (CAPA) was disappointed with the decision by the High Court to allow the Same Sex Marriage postal farce to go ahead. It is CAPA’s stance that equal human rights should be a given and not something that has to be voted on.

It is clear that this survey is an attempt for the current Prime Minister to placate the backbenchers within a divided party. Perhaps in the confusion of continuous dual citizenship debacles the Prime Minster has forgotten that a member of parliaments job is to represent their constituents and that EVERY independent poll has shown one thing: Australians want marriage equality.

What the Prime Minister does not realise is that that LGBTIQA+ community has spent decades living with fear of persecution and the with-holding of their basic human rights, we are certainly not afraid of a spineless Prime Minister. We, as a community will stand strong with our allies, we will deal with the hurtful words of hate groups that have already, and will continue to be spouted, and we will win.

CAPA will not only be encouraging people to vote yes over the coming months.And finally to the LGBTIQA+ community all we can say is that you do not stand alone.

“Whether or not the high court would have stopped the postal vote or not, the LGBTIQA+ community would still be fighting every day for our rights. Don’t dismiss us as being part of the fringe of society. We are here, we are mobilised and we will vote for our rights.”