Media Release: Everyone supports science but who is going to pay for it?

With the upcoming march for science and the release of the ANUpoll the picture is clear that Science is overwhelmingly supported around the country. For the Council of Australian Postgraduate Associations (CAPA) this is not a surprise nor should it be for the Federal Government.

On Earth day around the world scientists will be breaking out of their laboratories to stand up for the importance of science and research. The big question that needs to be asked however is who will provide the funding to invest in science and research?

Not only did the ANUpoll find that the majority of people support science but that 67% of people believed that science was best funded by government. Given the approaching federal budget now is the time for the Federal Government to walk the walk when it comes to research.

CAPA gladly stands with the scientists of Australia during the March for Science because we know how important university funding for science and research is to Australia. But with an expected cut to university funding we are left to wonder when the Federal Government will put their money where their mouth is.

“It seems at every federal budget Universities are expected to face cut after cut to their funding at a time when science, research and innovation is being touted as the key to Australia’s future,” said CAPA National President Peter Derbyshire. “On top of university funding cuts it also seems we should expect student will have to pay more for an education that with not benefit from any extra funding.”

“Science, research and innovation need to be more than buzz words. All we ask is that the federal government commit to these principles through an adequately funded university system” said Mr Derbyshire.

If the Federal Government really wanted to join in on the innovation fun we encourage them to try something new like increase university funding. 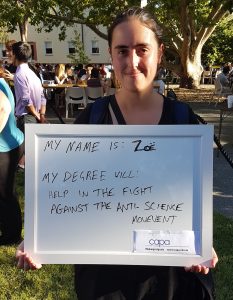 April 10 – The Council of Australian Postgraduate Associations (CAPA) has chosen to endorse and participate in the Science Marches that are occurring around the world on April 22nd. With over 80,000 full time equivalent science postgraduate students in Australia CAPA recognizes the importance of stable funding and education in science.

CAPA encourages all postgraduates to join the scientists and science enthusiasts on April 22nd at their nearest capital city to stand for the importance of science.

March for Science Australia is advocating for stable investment, informed policy, open communication, and universal education in science both in Australia and globally. With scientists being silenced internationally or denied travel preventing international collaboration, it is time for the scientists of the world to leave the labs and stand together on this day.

Closer to home the Australian Federal Government is focusing on innovation and industry while at the same time neglecting the blue sky research that generates the ideas of the future. When we do not adequately invest in schools and universities to provide the science training our country needs we get anti-vaccination and climate change denial.

“As a scientist and student representative I understand the concerns of postgraduate students when it comes to science in Australia,” Said National President Peter Derbyshire. “So many students have great innovative ideas but are worried that an uncertain career path will put an end to all that.”

“If we are serious about the importance of science and innovation in the Australian economy we need to start with the scientists of the future through education and stable funding,” said Mr Derbyshire.

CAPA stands with March for Science Australia and encourages all students that value the role of science in society to take part.

For the locations of your nearest march head to https://marchforscienceaustralia.org/cities/