From Monday August 26th, the Council of Australian Postgraduate Associations is Going to the Polls for Postgrads at twenty-five University campuses across Australia.

The Going to the Polls for Postgrads campaign will be launched at the University of Tasmania’s Sandy Bay campus today, Monday August 26th, with an information stall outside the Morris Miller library from 11.30am attended by the President of the Council of Australian Postgraduate Associations, Meghan Hopper, as well as representatives of the Tasmania University Union.

“Over the final two weeks of the Federal election campaign, we’ll be asking students at twenty-five campuses across Australia to Go to the Polls for Postgrads,” said Meghan Hopper, President of the Council of Australian Postgraduate Associations.

Students will be asked to complete postcards to the Higher Education spokespeople of the three major parties: Senator Kim Carr from the Government, Senator Brett Mason from the Opposition and Senator Lee Rhiannon from The Greens.

These postcards address the campaign’s major goals of strengthening and maintaining the Student Services and Amenities Fee; a 10% increase in higher education funding as per the Bradley Review; a secure academic workforce; a student-centric e-learning approach; a sector that focuses on knowledge outcomes, not business outcomes; and marriage equality.

In the final days of the election, CAPA representatives will present postcards from postgraduate students across the country, in person at the offices of the three Higher Education spokespeople.

“The Council of Australian Postgraduate Associations is not interested in ‘ranking’ the major political parties through a traditional scoring approach – we’ll be presenting all of the information on the policies that are important to postgrads and where the major parties stand, and we’ll leave it up to postgrads to make up their own minds,” Ms Hopper said.

“Regardless of who ends up as the Minister for Higher Education and Research post-September 7, our goal is to put the concerns of postgraduate and Higher Degree by Research students firmly on their radar through a campaign that is issue-based and party-neutral,” said Ms Hopper.

The following campus associations are included in the Going to the Polls for Postgrads campaign: 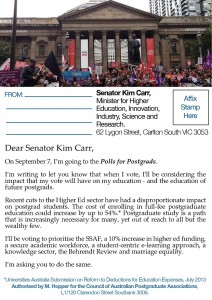 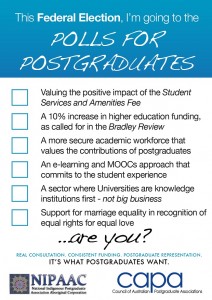 The Council of Australian Postgraduate Associations (CAPA) is joining forces with the National Union of Students (NUS) and the National Tertiary Education Union (NTEU) for a National Day of Action on Tuesday 20 August to champion the cause of publicly-funded and properly-funded higher education.

“Higher Education hasn’t been the hot topic in the media or amongst the major parties this election campaign, but it should be,” said Meghan Hopper, President of the Council of Australian Postgraduate Associations.

“As we prepare to launch our Go to the Polls for Postgrads campaign blitz in the final fortnight of the election campaign on campuses across Australia, the National Day of Action is an opportunity for postgraduate students to rally together with their undergraduate and staff comrades and put higher education on the national radar,” Ms Hopper said.

“Postgraduates are rightly concerned about what the future of our education looks like after September 7.”

“We’ve had cuts of $2.3bn to higher education earlier this year from the Labor Government, $0.9bn to research late last year, while the Coalition has committed to more of the same – plus the reversal of the Student Services and Amenities Fee in the event that they take control of the Senate,” Ms Hopper said.

“We’re now in an environment where you need a postgraduate degree to qualify for any number of careers, but only the most wealthy can afford it.”

“This cannot go on. Properly funded universities and properly supported students are essential for a smart future for Australia,” said Ms Rea.

Jade Tyrrell, President of the National Union of Students, said “Students in universities and TAFEs across the country feel sidelined and are devastated by the cuts announced earlier this year.

“Funding for higher education has now become an election issue, and we need our politicians to fight harder and find the funds for a desperately needed increase. Without an injection of more funds, the quality of our education will suffer and we are concerned the solution to make up the shortfall will be more student debt, particularly if the Coalition wins government,” said Ms Tyrrell.

The National Tertiary Education Union (NTEU), National Union of Students (NUS) and the Council of Australian Postgraduate Associations (CAPA) are calling upon university staff and students to participate in a National Day of Action on 20 August in support of publicly funded higher education.

We are also calling upon VET and school teachers and students, parents, employers, unionists and other members of the community to support our call to make education, including higher education, an issue in this year’s federal election. When we call for education for all – we mean from early childhood to higher degrees. Higher education should be available regardless of background or circumstance, but the costs of education keep increasing. Over one million students are now enrolled in higher education, but class sizes have almost doubled and half of the teaching is done by academics employed casually. The high quality of education we expect from our universities will suffer without better funding.

Back in April, the Labor Government cut $2.3 billion out of higher education to fund school education. Across the country there was outrage. The ‘efficiency dividend’ is leading to more staff job losses, more crowded classes and less help for students from disadvantaged backgrounds. The replacement of the Student Start-up Scholarships with a loan will add to the unreasonable debt many students already face upon graduation. The Coalition pledged to support these cuts. The Labor Government, after making grand promises to higher education, cut $4 billion in two years. The Coalition is looking to students to pay for the funding gap.

Rallies have been organised in key centres with more events on campuses.

National Tertiary Education Union members at a number of universities are considering industrial action on 20 August to support enterprise bargaining negotiations on key issues including workloads and job security. The NTEU Branches at these universities have successfully conducted ballots of members and are already engaged in protected industrial action.