An Inquiry into Higher Education, Just Minus the Student Voice

It would seem that the Senate Education and Employment Committee has forgotten that the key stakeholders of higher education are the students, according to the Council of Australian Postgraduate Associations (CAPA). The tabling of the inquiry report into the Higher Education Support Legislation Amendment Bill 2017 has shown a remarkable bias by ignoring student submissions and testimonials.

CAPA also questions the lack of any Aboriginal or Torres Strait Islander student representatives at the public hearings. Theses proposed changes to enabling courses are expected to directly disadvantage these students and it is essential that their input is sought.

To have student voices ignored but allowing Andrew Norton two bites of the cherry is galling. Not only was Andrew Norton on the “expert panel” that developed this package but also presented a submission and appearing as a witness to the inquiry.

CAPA would like to renew its call for senators to reject the bill in its current form. It is essential for the Senate to stand with students and protect Australia’s future.

“It is shameful that an inquiry into higher education barely considers the student voice in this issue.”

“What does it say about the committee inquiry process when key student representatives are not provided with the opportunity to present about issues that directly affect their education?” 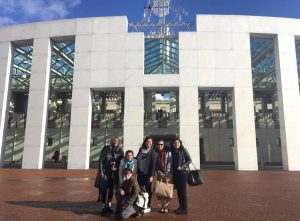 This legislation is set to hobble the Australian research and innovation economy and ruin our ability to compete on an international scale. It is the next step in punishing Australian students for the mistakes of government budget mismanagement. Not only do universities provide a huge boost to the Australian economy, they are also some of the biggest employers wherever there is a campus.

These cuts could result in lost jobs, suffering regional hubs, struggling graduates, and seriously hurt one of Australia’s biggest exports. Then there is the moral argument. How can the Australian government look young Australians in the eye when all they do is cut away at our future?

These protests will be occurring at all universities that understand their role in society and where academic freedom is encouraged. We are calling on all postgraduate students to join with their local NTEU branches at campus events on August 8th.

Information about the events that are happening at university campuses can be found here http://paymoregetless.org.au/news/events

“The sector is united in its rejection of this package. Staff, students and universities all know what is at stake regardless of the Minister’s rhetoric”

“The cuts to funding and the increase in fees directly impacts the ability of universities to produce the Australian graduates needed into Australia’s future. The cuts are nothing more than looking for short-sighted gains instead of focusing on long term economic growth.”

“The last Higher Education package we soundly rejected and that should have been the end of the discussion regarding cuts and increased fees. But this package is more of the same showing no innovation in the government’s policy decisions.”

The findings from today’s release of the Australian Human Rights Commission report into sexual assault and sexual harassment at Australian Universities paints a concerning picture for students according to the Council of Australian Postgraduate Associations (CAPA). While the results from this survey will not come as a surprise to many student leaders they do provide the groundwork needed to make real change.

For CAPA one of the greatest concerns is the prevalence of sexual harassment and assault that is perpetrated by staff on campus toward postgraduate students.

These results indicated that sexual violence from staff towards postgraduate students was higher than towards undergraduates. What’s worse is that given undergraduates outnumber postgraduates almost 3:1 is that these numbers present a grim story for the student/staff relationship at this level.
The power imbalance between research students and staff at the postgraduate level is a long-standing issue for Australian Universities.

Reporting is also a recognized issue within this report with many universities having vague or absent reporting structures when it comes to sexual assault and sexual harassment. For postgraduate students, whose supervisors hold their career in their hands, this is also an issue of a power imbalance and fear.
CAPA’s 19 recommendations to address the issues of sexual assault and sexual harassment are aimed at enabling students to report these issues without fear of reprisal.

CAPA will work with Universities Australia, The Australian Council of Graduate Research, and Vice-Chancellors to ensure that this issue is put to an end.

CAPA National President Peter Derbyshire says:
“For anyone that has spent time with postgraduate students they will know it is the worst kept secret in academia that such behaviour occurs.”

“I have spent almost 5 years representing postgraduate students and there are always these stories about but students are too afraid to speak up. Under the current structures there is nothing to protect a student from reprisals in their career if they do report these issues.”

CAPA Womens Officer Alyssa Shaw says:
“Bullying and harassment are commonplace by supervisors and teaching staff are well-known and prevalent issues in Universities. But now we have evidence to support what has been long denied or overlooked, that sexual harassment and assault are also prevalent amongst postgraduates, particularly from university staff.”

“Sexual assault and sexual harassment is insidious and systemic within all Australian Universities and more action is needed to address this issue than what has been announced today. Universities should be looking to CAPA’s recommendations if they want meaningful and substantive change.”

Students in need of help or support can call Universities Australia’s 24/7 phone line on 1800 572 224, or visit their university’s dedicated counselling service – details of which can be found at University Australia’s ‘Where to seek help at your university’ web page.